Be part of it!

Back again for the third year running: Spryker EXCITE 2022.

Successful e-commerce in 2022 is about so much more than just selling online, as market demands are rapidly shifting, and new technologies are changing the game. Gain insights from industry veterans, learn about exciting new and future e-commerce projects, and feel inspired by our amazing line-up at Spryker EXCITE 2022.

May 24th, 2022
Including a pre-event for Spryker customers on the 23rd of May. All Spryker customers who register for onsite attendance in Berlin will automatically get an invitation for the customer day at “Hotel Oderberger” close to Kulturbrauerei.

Or you can join virtually from all over the globe! 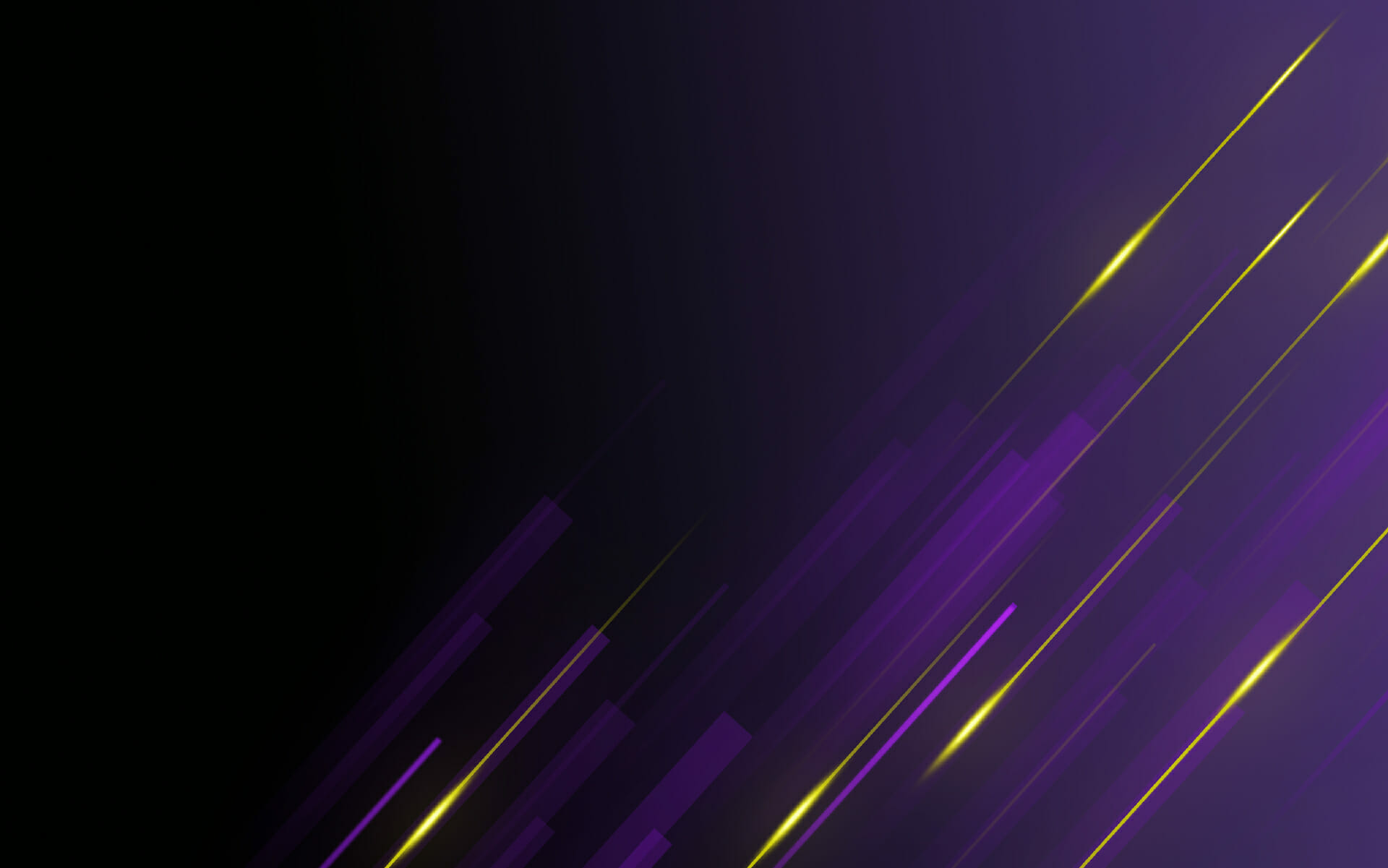 Hosted live from a cinema in Berlin and streamed across the world, Spryker EXCITE 2021 was our 2nd hybrid e-commerce conference – and attendees were left amazed and inspired by our top industry speakers, Spryker customers and inspirational speakers such as Guy Kawasaki and Arnold Schwarzenegger.

Check out this video for some highlights of Spryker EXCITE 2021. 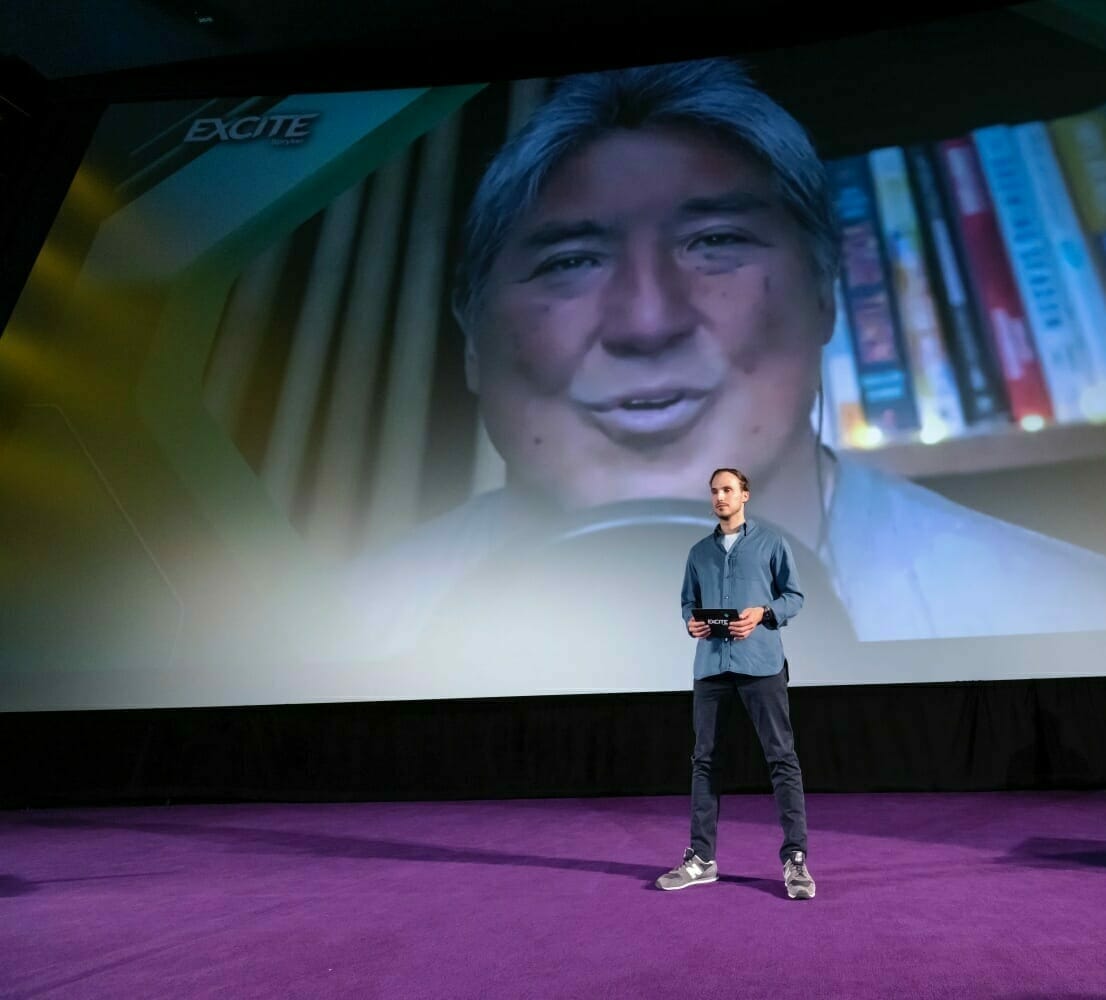 Be ready to get EXCITED

It's not just another commerce conference!

Spryker is different - and so is EXCITE! Learn why you should definitely mark the day (and night) of the 24th of May 2022 in your calendar!

At Spryker EXCITE we not only want to educate you – we want to inspire you and leave you speechless. So this year we are bringing one of the greatest athletes of all time on stage in Berlin! He captured 28 Olympic medals, including a record-setting 23 gold medals, and set 39 world records over the course of his distinguished career.

Phelps utilized his performance bonus for winning eight gold medals in 2008 to establish the Michael Phelps Foundation, which promotes water safety, healthy living (physical and mental), and the pursuit of dreams.

Phelps courageously opened up about his own mental health challenges, becoming one of the first and most prominent athlete voices who have helped catapult the important conversation across sports and pop culture to help and encouraged others affected!

Dr. Camille Wardrop Alleyne is a rocket engineer, space scientist, internationally acclaimed speaker, writer, educational leader and science ambassador whose accomplishments in the field of space exploration have been extraordinary. In the highly technical fields of science and engineering where women are underrepresented, she is one of the leading voices in aerospace engineering and one of the few women of color to serve in a senior leadership position at NASA.

Over his 15 years leading the Company, Mr. Iger built Disney into one of the world’s largest and most admired media and entertainment companies, while focusing on the three fundamental pillars of his strategic vision: generating the best creative content possible; fostering innovation and utilizing the latest technology; and expanding into new markets around the world.

Chief Technology Transformation Officer (CTTO) and Head of NBS IT.

Elizabeth Theophille has been the Chief Technology Transformation Officer (CTTO) and Head of NBS IT since November 2020. She is a member of the NBS IT. Elizabeth is also an Independent Board Member at 8×8 a Global Communications Company since June 2019.

Prior to her current appointment, Elizabeth served as Head of Technology Architecture & Digital IT from November 2016 – October 2020, whilst also leading EOS (Enterprise Operations Simplification) a transformation programme across Pharma, Oncology and Sandoz to drive innovation, business growth and value.

As the Women in Tech Founder for Switzerland, Safia is a purposeful tech leader with a passion for people & wants to contribute to making an impact in our society. She strongly believes that as women gain rights, families flourish and so do societies.

And as Melinda Gates says in her book ‘The moment of lift’ : Whenever you include a group that’s been excluded, you benefit everyone. And when you’re working globally to include women and girls, who are half of the population, you’re working to benefit all members of every community. Gender equity lifts everyone…

With our second speaker we stay in the water but changing the discipline to an equally breathtaking record holder – in the truest sense of the word! Tom Sietas is the most successful German apnea diver.

He is multiple world champion and German champion and realized countless world records in all three pool disciplines.

It’s hard to believe – but this guy can hold his breath for 15 minutes and longer – and shows us, that the absolutely incredible is possible – with the necessary mental strength! He also explains the audience, how to get this strength with specific goal setting and training planning.

Master Mentalist
Lior Suchard mind-blowing performances of miraculous predictions, influencing thoughts and startling mind readings have made him the most sought-after mentalist in the world. Performing these amazing mental feats, Suchard takes live audiences on an incredible journey through the wonders of the human brain. Suchard’s act is build on drama and astonishment, and integrates lots of humor and full audience participation, to create the ultimate combination of wonder, laughter and fun.

We’ve got an incredible line-up of speakers for Spryker EXCITE 2022 – bolder and better than ever! Including a carefully curated mix of industry insights, technical trends, customer use cases, and inspirational speeches, you’re going to be blown away! And if you think we can’t top Arnie, just wait and see who we’ve got for 2022…

All the exciting information on what's happening during the event so you don't miss out! 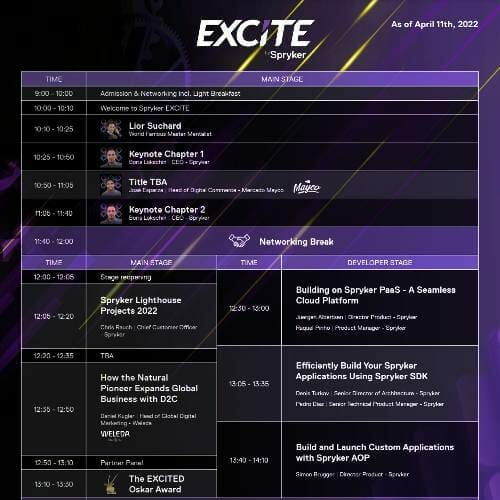 Meet & learn from these companies

Review all our exciting Presenters and Sponsors below