Over the last few weeks, we’ve had a lot of exciting feedback about the latest Spryker financing round, and lots of people have been asking us why we focus on marketplaces. The first answer to this question is that, as a product, Spryker really comes into its own when faced with requirements above and beyond those of a standard e-commerce solution, which is very much the case for most B2B projects and 100% the case when it comes to acquiring marketplace capabilities. And by ‘marketplace capabilities’, we’re not talking about technical interfaces with existing marketplaces like Amazon or eBay, but rather the capability to actually *become* a marketplace. This leads us to the second question frequently asked about our focus on marketplaces: faced with a rampant Amazon, who has a realistic chance of becoming a marketplace these days? Our answer is: more companies than at any point yet. As much as anything else, this is reflected in the RFPs we get, the vast majority of which now include marketplace features in the spec’. There are several drivers behind what has been a surge in demand during the ongoing 2020 Corona crisis – let’s look at them together.

Driver nº 1: The long tail is getting fat

This summer, it will have been 15 years since Chris Anderson’s The Long Tail was published, and for several years afterwards, there was a lot of excitement about the opportunities to be found in ‘selling less of more’, as the book’s subtitle reads. A lot of discussion in the e-commerce scene revolved around identifying the segments where stocking a huge selection of low-turnover articles represented a lucrative prospect. Thinking back to that time, I’m sure that a segment like audio and musical instruments would have been discussed as a ‘niche segment perfect for a long-tail strategy’. Now, in 2021, it is a lucrative niche indeed – and one large enough for a retailer like Thomann with Europe-wide operations to turn over around a billion Euros annually (great write-up of the Thomann story in English here). This development is symptomatic of what has happened since the term ‘long tail’ was first coined: lots of long-tail categories have become big enough to support B2C marketplace business models. Perhaps the quickest way to explain what I see happening here is to modify the original graph Anderson used to visualize the long tail. 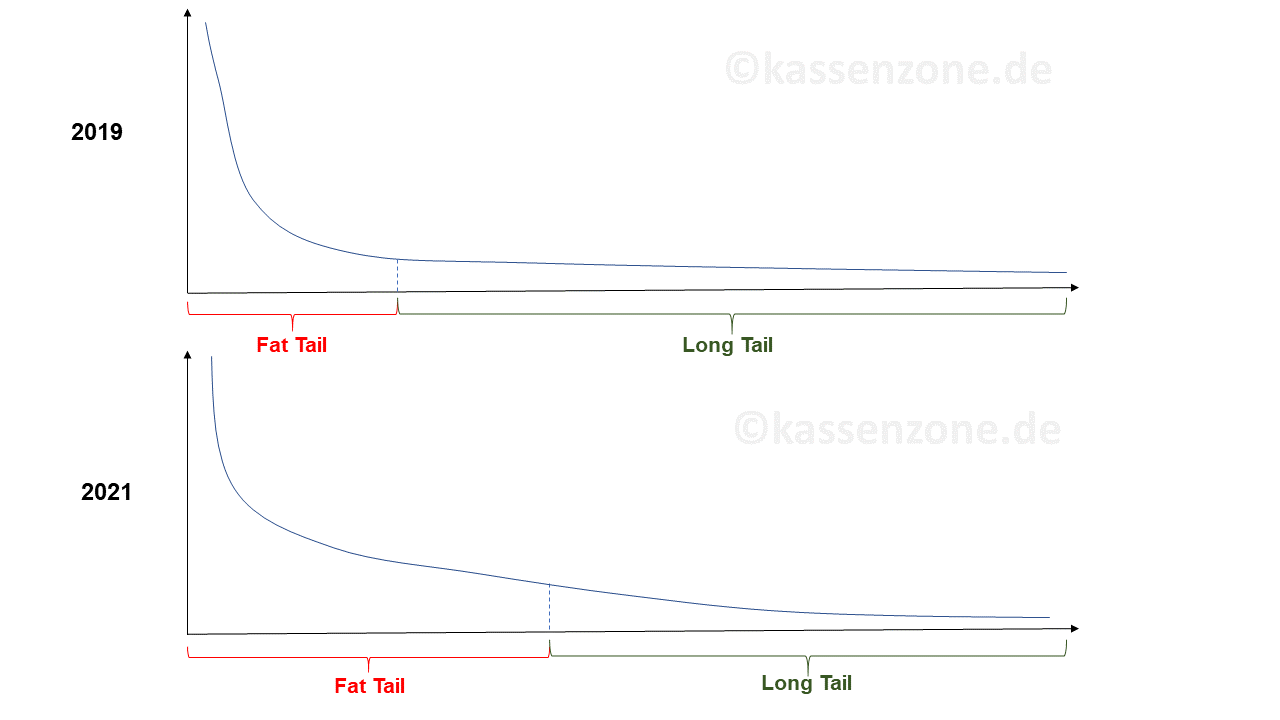 Essentially, the threshold for genuine long-tail is being pushed further out along the x-axis – and 2020 tangibly accelerated the speed at which it is being impelled. Staying on this graph, Amazon’s area is the closest to the y-axis: when it’s about selling even more top-sellers, the Seattle Titan remains unchallenged – but when it comes to finding answers for the increasing number of ever more sizeable niche segments, Amazon is struggling as dynamic medium-sized category-killers hit their stride.

For a B2C marketplace to be genuinely efficient, it tends to need a large number of sellers and lots of buyers, too, who choose to meet there to do business. In B2B, however, 10 to 20 suppliers and a couple of hundred or thousand customers can be enough to support a highly-efficient marketplace. This is the area in which Spryker is active – and if you’re looking to understand why we see so much potential here and get past the overly-hasty conviction that “it’s all on Amazon these days anyway”, I can really recommend this podcast with serial founder entrepreneur Fabrice Grinda:

As anyone who has ever tried to implement a marketplace project will testify, it’s not exactly straightforward. Even the simplest of specifications (e.g. more than one seller per product) can turn out to be incredibly complex and require several weeks of programming. That’s why we developed a Spryker marketplace suite for ambitious companies looking to become the location for others to do business. Without the right technology, the multifarious details of running a successful marketplace quickly become unmanageable – and that a marketplace cannot run on sufficient supply and demand alone has been particularly well explained by Nobel Prize laureate Alvin Roth in a range of publications.

Successful marketplaces must be “thick, uncongested, and safe.” Sufficient “thickness” means there are enough participants in the market to make it thrive. “Congestion” is what can happen when markets get too thick too fast: there are heaps of potential players, but not enough time for transactions to be made, accepted, or rejected effectively. “Safety” refers to an environment in which all parties feel secure enough to make decisions based on their best interests, rather than attempts to game a flawed system.

If you fancy having a look under the bonnet at the inner workings of a marketplace back-end, by the way, try this for size.

In my view, these drivers will lead to us seeing a lot more marketplaces over the course of 2021 – even if they don’t always immediately shout ‘marketplace’. That marketplaces are set to become the dominant model is something I’ve been convinced of for a while now, too: if you read German, here is an explanation of my three-phase e-commerce model in which shops evolve into marketplaces which in turn evolve into platforms. So in my view, it’s three cheers for the Fat Tail!